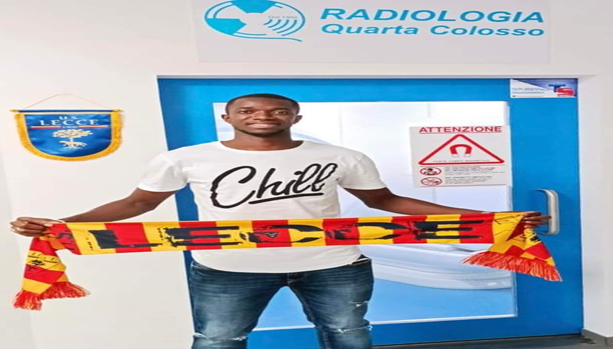 The head coach of the senior national football team of The Gambia, Tom Sainfeit has reacted to Assan Ceesay’s move to US Lecce in Italy, noting that it is a deserved move by the all-time Gambian top scorer, however, he warned Ceesay that Seria A is a higher league than Swiss league.

Tom, whose tenure as the head coach of the national team has seen Assan flourishing in the red, white and blue colour, said that the whole country should be proud of the former Gamtel striker.

“It is a fantastic and deserved move for him. This is a good move and I am proud of him. The whole Gambia should be proud of him for this move”, Tom told TFN.

Assan, earlier today penned a two-year contract with the Italian side with an option of a further year at end of his contract.

The tall and agile striker will not be the first Gambian and the only Gambian to play in the Italian Serie A  next season. His Gambian compatriot Musa Barrow, Omar Colley, Ebrima Colley and Ebrima Darboe are all playing in the Italian top league.

Assan was a crucial player for FC Zurich last season by scoring a massive 20 goals and 10 assists. His spectacular performances earned Zurich the Swiss league trophy.

While praising Assan for his deserved move to Italy, Coach Tom Sainfeit warned his national team’s prolific striker that the Italian league is higher than the Swiss league and that the striker should adapt to the situation.

“Seria A is one of the top leagues in Europe. Lots of Gambian players went to play in Italy but not many succeeded.  He should improve and become stronger again beck the Italian league is a step higher and more difficult than the Swiss league. But I am happy for him and I think he will adopt”.

After signing his contract with US Lecce, the striker went to his Facebook page and delivered a message to his former club.

“I can’t repay the courage, affection and amazing support during these 4 years. It’ll be unforgettable. I’m eternally grateful to play for this historic club and the memories we made together”.

U.S Lecce is a newly promoted team in the Italian Seria A.