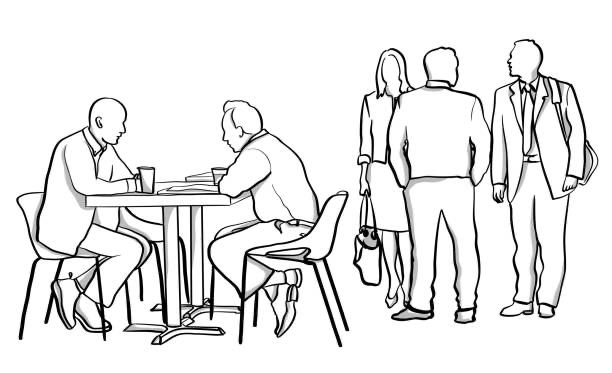 By the window, I sit inside the Tim Hortons coffee shop, trying to play catch-up with my last week’s Sunday copy of The New York Times and also chatting with friends online. I am unable to do neither. My concentration, if you factor in my repeated coffee-sips, wheat-bread-munches and the chorus of voices within my vicinity, is neither here nor there. It is adrift, a net cast wide into sea.

But how do you create your own self-contained world in a public place like a coffee shop? You have to contend with a lot of distractions: the frequent comings and goings of customers, the whirring of the coffee machines, the bells of the cash registers, the buzz of music from the ceiling and the jabbering of colleagues behind the counter. The coffee shop is no sanctuary of perfect harmony. If anything, it only reinforces the fecklessness of my concentrative abilities when I am out of the house. In public settings, I tend to harbor a migratory mind, possessed of the inquisitiveness of a rambunctious teenager.

It’s possible that my wandering looks inside the shop may have caught the attention of this man – of an indecipherable age – sitting close to me. Or maybe he had detected my accent during my phone conversations – something told him there was a certain foreign-ness to me: an African? Maybe. Did I come across as somebody familiar, approachable? Out of the blue, he beckoned me over to his table and pulled out a letter from an insurance company. He pointed to a name written on the top left corner of the letter. I took it as an unspoken request for me to read it out to him. “Baide Ba,” I announced. He nodded approvingly, pointing his index figure towards himself as though he were speech-impaired. But I concluded that he simply couldn’t read. He just wanted to be sure if the letter was for him. I asked him in the Pulaar language: “Are you Senegalese?” He looked taken aback. He wasn’t expecting that. ‘’Yes,’’ he replied. He said he came from the Matam area in northeastern Senegal. “From Gambia,” I declared before he asked. We both laughed. “We are all the same people,” he replied in Pulaar.

Our occasionally high-pitched conversation on subjects ranging from Fulani history to marriage to religion attracted the attention of a young man sitting in the far eastern corner. He had been reading, a laptop and a stack of books purposelessly sitting at a jaunty angle of his table. I saw him get up and walk leisurely over to us. “How are you?” he said to us in Pulaar. We looked up, our faces aglow. He announced his name: Ebrima Diallo, an engineering student at the Lawrence Technological University in Southfield, Michigan, and from Timbi Medina, Pita, Guinea.

There is nothing special about three West African Fulani men meeting up, and by chance, inside a coffee shop in a foreign land. Yet somehow, I found it captivating. The coincidence of our meeting, or rather how we met – there, appealed to something imaginative in me. Maybe it was the quirk of fate. Or maybe it was the beauty of our companionship that it didn’t take long before we warmed up to each other and before we settled into the groove of things.

I don’t know about the other two, but I came away reflective of the symbolism of three strangers huddling around one table and sharing in the collective experience of their immigrant lives, and in the larger context of humanity. This unanticipated experience and the sheer immensity of its allure, stayed with me long after my new buddies and I had parted company, each going a different direction, and each perhaps hoping for a promising future for our new-found acquaintanceship.

On this bright, sunny Sunday morning, I came for a cup of coffee, to muse on an old newspaper copy and to surf the Internet in between. Yet somehow, I ended up doing other things – I went off-script. I found myself helping a stranger, building new human connections and pondering the infinite possibilities of life.