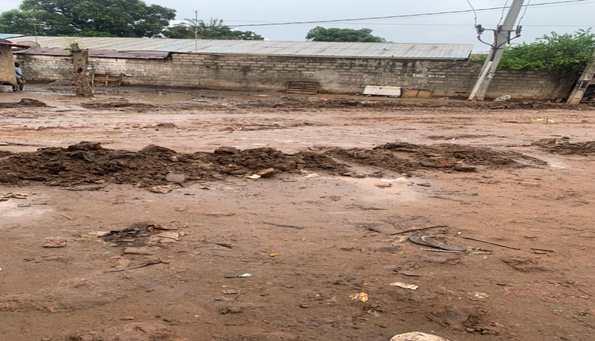 Gigo Construction Company Limited has over the weekend commenced construction of the four hundred kilometres Brikama Jambarr Sanneh road. This comes after years of complaints of residents on the poor condition of the road from the tenure of one Nyambai ward councilor to another.

The road is usually worse during the rainy season. Whenever it rains, the road will be tarred with water and the water will be stagnant for days. This will barricade vehicles from using the road while those on foot struggle to access the road. Many avoid, while those who use the road will either walk carefully on fall to the ground.

Bayaya Daffeh is a canteen owner on the roadside in Jambarr Sanneh. He does business in a small canteen as a source of income. According to the old man, he struggles to make a living during the rainy season, saying that his business is closed during such period. This is said because of the inaccessibility of his canteen due to flood and stagnant water.

“I close my canteen during the rainy season. It is my only source of earning, but I have no choice but to close it.  Who will come to buy from me? Nobody. There is no way that buyers will use it because here is constantly filled with stagnant water during this time”, the old man told TFN.

On the 15th of this month, the Brikama Area Council gave a contract to Gigo Construction to construct the road within four months. This will cost the Council Nine Million, Nine Hundred and Ninety-four thousand and Nine Hundred Dalasi. According to Chairman Sheriff Sonko of the Brikama Area, the project is devoid of external funding. He said it will be wholly funded by his council.

When TFN visited the site, Bayaya narrated that when the road is erected after over two decades of promises and failures, they will call for celebration and this will be marked by dancing even for the elderly men and women.

Lamin Darboe too is an old man who owns a canteen on the roadside. He told the Fatu Network that the road is bad and so many people be it residents and those that use the road to access the market or the vicinity suffer a lot. He said in the rainy season, so many people will fall on the road due to its slippery nature and that so many mobile phones will be lost.

“The number of mobile phones that are lost here is too much.  Here, you will fall if you don’t walk slowly and carefully. People cannot avoid this road because it links to the market and from the market to the vicinity.  We only hope this time around, it will not be an empty promise”.

To Lamin Darboe, after several years of promises and failures, he will not believe that the road will be constructed until he sees that it is done.

The Jambarr Sanneh road links the highway from the police station in Brikama to the Brikama-Gunjur highway.

After signing the contract on June 15, Amadou Gigo of Gigo Construction promised that he will deliver a first-class road at the end of the contract.

The Chairman of the Brikama Area Council also acknowledged the productivity of the construction company. He cast no doubt that Gigo construction will do the job well.

Residents around the Jambarr Sanneh road have now seen a glimmer of a better road over the weekend when the company started levelling and digging holes on the road.

The road, when done, is expected to decongest the already congested traffic in the Brikama Market.