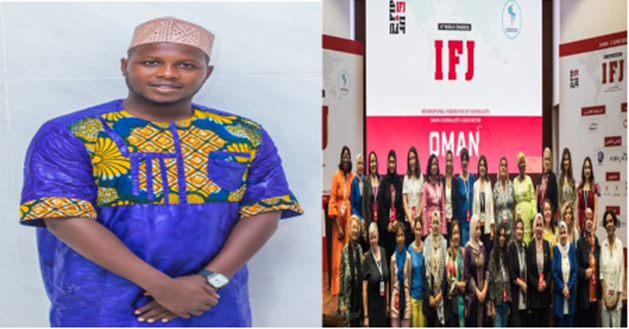 The Gambia Press Union (GPU) has in a press statement disclosed that the union’s President, Muhammed S. Bah, is to serve a three-year term in the Gender Council of the International Federation of Journalists (IFJ).

Bah’s nomination by the GPU was accepted by the IFJ ahead of the 31st IFJ World Congress taking place in Muscat, the capital of Oman, from the 31 May – 3 June, 2022 – where members of the new IFJ Gender Council were unveiled on Tuesday.

The Gender Council plays an important role as the IFJ’s main voice on gender.

Its responsibilities include developing instruments to guide projects and policies concerning gender and good practice, raise awareness of gender issues, and mainstream gender issues throughout the IFJ, its projects and its member unions.

The Council’s recommendations, its activities and projects on gender are to be included in all IFJ Expert Groups, Executive Committee, the Congress, IFJ projects, and the IFJ Constitution.

Reacting to his nomination to serve in this important body of the global body of journalists, Muhammed S. Bah said he is looking forward to making significant contributions to the work of the Gender Council.

“The GPU has dedicated a lot of efforts to gender and welfare issues confronting journalists by conducting studies on working conditions of journalists and sexual harassment in the media,” Bah said.

“These interventions resulted in the development of a Collective Bargaining Agreement and a Sexual Harassment Policy which are now being used to address gender and welfare issues. I hope to bring these experiences to the IFJ as a Member of the Gender Council.”

The work of the Council is aimed at achieving three broad objectives:

The Gender Council is led by a Chairperson and a Vice-chairperson who are elected from among nominated members, and the Council’s mandate is for a term of three years.

It is made up of 37 members from six IFJ regions including Africa, the Arab World and the Middle East, Asia and the Pacific, Europe, Latin America and the Caribbean, and North America.

The Council’s activities are overseen by the Gender Council Steering Committee which is composed of two members from each IFJ designated geographic region including the chair and vice chair.

The Steering Committee meets at least every six months and when possible, at the same venue and in the same period as the IFJ Executive Committee.

In recent years, the Gender Council  carried out a number of activities, including a campaigns against online trolling, ILO  Convention 190 on harassment and violence at work, byte back, and women in front.