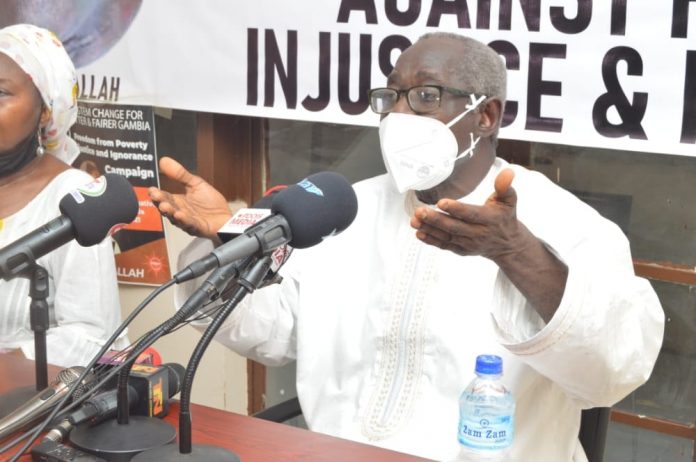 Retired veteran politician, Hon Halifa Sallah has suggested that the Constituency Development Fund (CDF) be scrapped from the National Assembly Budgetary Allocation and redirected to the development budget of local councils.

This according to Hon. Sallah will enable local councils to embark on more development projects. He called on the media to interrogate all National Assembly Members and ask them how they utilized the funds they have been given over the years.

“The Constituency Development Fund was created during our time in Parliament, there is nothing wrong to take it if it is there. Now the media have the chance to find out how the funds were utilised by the beneficiaries. That is what the media can do, interrogate every National Assembly Member on how they spent the money,” he said.

Hon Sallah was speaking at a press conference at the PDOIS party’s Secretariat in Churchill’s Town, Serekunda, as he shares his party’s position on the recent councillor by-election.

He maintained that during his term as National Assembly Member he refused to take the said funds.

“I refused to take it because if I said anything then they would say this man is very strange but now you see I am free; I am not there at the National Assembly to antagonize anybody. I am now a sovereign Gambian citizen determined to make my mark in the country that is why I am saying that the fund should be scrapped.”

The funds he advocates should be put into the development funds of the councils so that such funds can be accounted for.