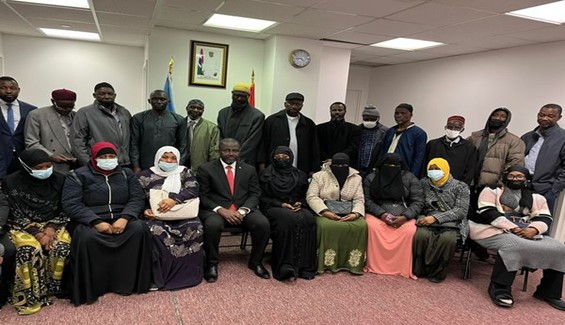 In his welcoming remarks, the Ambassador and Permanent Representative of The Gambia to the United Nations in New York, H.E. Lang Yabou, warmly welcomed victims’ families to the Mission and thanked them on behalf of H.E. the President for coming to receive what he described as a gesture of solidarity from the Government of The Gambia. He said the circumstance that led to the meeting is indeed an undesired one, noting that worldly ephemeral material cannot be equated to human life because it is sacrosanct. He used the opportunity to pray for Allah’s mercy on the departed souls.

Ambassador Yabou explained that previous meetings and consultations with families of victims were all geared towards ensuring that no member of victims’ families is left behind. He said accountability is an integral part of good governance thus the need to ensuring that every victim gets his or her fair share of the funds. He informed the gathering that as government representatives, accountability and transparency are key to their work.

Ambassador Yabou recognised great efforts made by the staff of the Permanent Mission as well as the collaboration and support given by The Gambia Embassy in Washington, D.C, the 2 Mosques, Gambia Youth Organisation and Elders in generating an all-inclusive data concerning the victims and families. He reiterated that the involvement and presence of the Embassy in Washington, D.C. is important as the welfare of every Gambian in the United States falls squarely under the Embassy.

The Ambassador used the opportunity to hail the unity and solidarity between members of the Gambian community, especially, when the unfortunate incident happened. He said the incident has further strengthened bonds of solidarity adding that each and every member of the community rendered support to victims in one way or the other. Ambassador Yabou returned gratitude to His Excellency, the President, Ministry of Foreign Affairs and the People of The Gambia for the support given as The Gambia is the only country that gave such a relief package to its citizens affected by the fire. He therefore urged families to remain strong adding that the tragedy was ordained by Allah (SWT).

Ambassador Yabou recalled the prompt engagement of the late Ambassador Dawda D. Fadera when the tragedy happened and how the team and the Foreign Minister, His Excellency Dr. Mamadou Tangara discussed the issue of the humanitarian gesture and came to a consensus that support should be given to the victims.

He called on the community to inculcate high sense of discipline in their children and send them to school. This, he added, would further increase the value and recognition of the community in the US. He also informed the gathering that The Gambia Government is appreciative of support given by Gambians in the United States as well as other nationals.

The Honorary Consul-Designate, Mr. Ebou Cham, commended the entire Gambian community for the cordial working relations he had with them since the incident broke out. He used the opportunity to pray for the victims by wishing them peace and unity as a community.

Mr. Sheikh Musa Drammeh, a community leader, who spoke on behalf of the community said it is not the amount given but it is the gesture that matters and that meant a lot to them. He thanked the staff of the Mission in New York and the Embassy in DC for the collaboration and support since the incident happened. The support, Mr. Drammeh said, was overwhelming and therefore expressed profound gratitude and assured that as a community they will continue to support and defend the Government and its officials. He observed that it is consoling to know that the Government is sensitive to their pain.  He expressed the community’s displeasure over what he referred to as the lack of enough support and sensitivity from the US authorities. Mr. Drammeh concluded by calling for urgent steps to be taken by their community elected authorities to address the challenges facing them as a community.