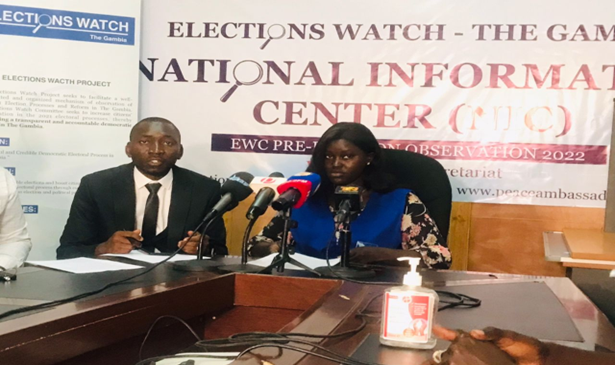 The Elections Watch Committee (EWC) has disclosed that there was no major incident reported during the voting and counting processes in the recently conducted counsellorship by-elections in KMC and West Coast Regions.

The EWC made the disclosure at a press conference held at its head office in Kanifing on Monday 16th May 2022 to update the media on their preliminary findings pertaining the said elections.

EWC elections preliminary report also disclosed that campaigns were peaceful but however confirmed low voter turnout during polling. According to the reports, Gambians peacefully participated in the said by-elections with few minor challenges.

According to EWC, over fifty-nine trained and accredited observers were deployed across forty-nine polling stations to monitor the voting and counting processes. These include six mobile and fifty-three stationed observers.

“The EWC has observed key aspects of this electoral process beginning with the campaign period and released its findings about the pre-election environment with corresponding  recommendations to election stakeholders. Our observers noted low presence of security personnel during campaigns and low sensitization of Covid-19 prevention messages. Our observers also confirmed that most polling stations opened on time.”

The committee has been monitoring various election processes in the country ranging from presidential, parliamentary and local council elections.

It reports that political parties and candidates conducted their campaigns without restrictions, but however confirmed low presence of security personnel in various polling stations.

“One of the challenges we still faced is the lack of proper communication from the Independent Electoral Commission. Sometimes, they do changes without informing us and our people will be deployed to certain places and later found out about the unannounced changes. This is still affecting us,” Momodou Juju Jallow, National Coordinator, National Youths Parliament explained.

The report indicated that low level of messaging and adherence to Covid-19 health and safety protocols during the campaign period as well as on polling day were not observed. However, it confirmed that all eligible voters were allowed to cast their votes.

The committee recommended for political parties and candidates to utilize the prescribed legal process to pursue any complains and to ensure that party agents are trained on election procedures and understand their role in observing election processes.

The IEC is also recommended to publicly provide polling stream level results in a machine-readable format in a timely manner as a measure of transparency. They also give similar recommendations to the media and security personnel on elections matters.

The Elections Watch Committee (EWC) seeks to facilitate well-coordinated and organized mechanisms election processes and reforms in The Gambia. The Committee also seeks to increase citizens’ participation in electoral processes, thereby promoting a transparent and accountable democratic system in the country.