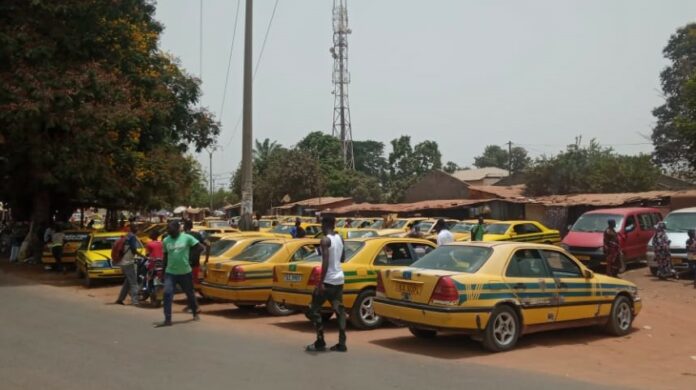 The Police Commissioner in Brikama and Banjulinding Police stations has held a mediation meeting at the Banjulinding Police Station with all parties involved in the ‘Brikama-Gidda taxi fare increment saga’. The essence of the meeting is to discuss and resolve the ongoing crisis which started following an increase in transportation fare by taxi drivers plying the Brikama-Gidda route

In attendance was the Executive Committee of the Brikama-Gidda Taxi Garage, Chairman of the Gidda Village Development Committee, Community Women Leaders and representatives from the Gambia Transport Union.

For over one week, the taxi drivers plying the route to Gidda have either stopped plying the route or insisted passengers pay the new fee of 13 Dalasi. Others have even gone to the extent to embark only on town trips which are quite expensive.

Yesterday, this medium reported that negotiations between the people of Gidda Community in Brikama and the taxi drivers came to a standstill leaving commuters with no choice but to either trek or pay ‘town trips’.

At about noon today Tuesday 17th May 2022 negotiations continued.

According to the Public Relations Officer of Gidda Youths For Development the Commissioner of Police in Banjulinding and transport union representatives on the ground made it clear that all town taxi fares are D10.

However, speaking to TFN, the president of the ‘dalasi dalasi’ garage, Buba Jallow said that the Commissioner of Police said they (police) will not impose on the drivers what to do, meaning they are free to either have a change of mind or continue with their town-trips.

He insisted that as drivers they will stand by their previous statement which was that people pay 13D or opt for a town trip. He advised the people of Gidda to pay D13 or continue facing the challenges they currently face.

He explained that the reason why they are insisting on the D13 is because Gidda is off the road, and it is not a smooth route for drivers.

This means that despite the intervention of the Police Commissioner and members of the transport union, the impasse is yet to be solved.

At the time this story was published taxi drivers at the Brikama Gidda Garage had not started plying the route for the normal fare f 10D.

Meanwhile, some drivers have threatened to abandon plying the route if the community continues to insist on paying 10D.