Over Lack of Classes For Lectures; UTG Students Complain 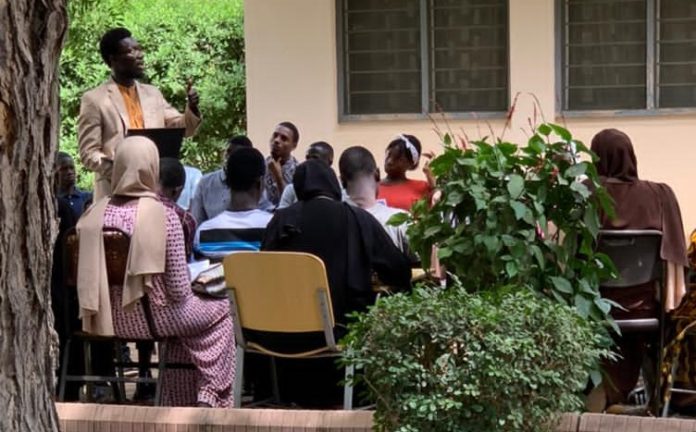 Scores of students paraded the campus expressing their dismay on Tuesday as a result of the unavailability of classrooms to hold their lectures. Some classes have been cancelled and others held outside.

“We are not happy with the current situation and we are the least pleased with the management. We don’t have any classroom for lectures and as a result of that, the class is being called off. This is sad and unbearable,” Dodou Janneh, a Political Science Student and a student leader in the School of Arts and Sciences told The Fatu Network.

According to Dodou, he reached out to the office of the Head of the School of Arts and Sciences to share the plight of the students with him but the Head of Department (HOD) blamed the Gambia College for acting contrary to the agreement.

We can confirm that for the past two weeks classes are either moved or called off due to the unavailability of classrooms.

Fatima Jarju, the Deputy Gender and Health Minister of the Social Sciences and Humanities Students’ Association said that the situation is unfair to the students.

“We are not having classes right now because there are no available classrooms since last week. It is very unfair for us to pay our fees, pay our fares, come to school and don’t attend any class for the whole day. We deserve better and this suffering cannot continue after 23 years since UTG was established. We are ready to take the matter into our hands,” Jarju said looking rather disappointed.

Nyaninka Manjang and Abdoulie Saidykhan, are both affected students whose classes have been held outdoors. The duo pointed out that diplomacy has failed and that students in the University should go radical.

“Diplomacy has failed. For them to put an end to this persistent problem, we will stop lectures and go radical,” Saidykhan said.

The president of the Social Sciences and Humanities Students’ Association (SoSHSA), Ismaila Jobarteh also expressed his disappointment with the current situation. He called for calm and assured the students of his Association’s willingness to sort the issue out, promising that his Council will further engage the management to see how best to solve the problems.

“If diplomacy doesn’t work, we will do what the rest of the students want us to do,” President Jobarteh said.

Ismaila Jobarteh is leading a sub student association at the University of The Gambia based on the Brikama Campus.

Share
Facebook
Twitter
WhatsApp
Linkedin
Viber
Previous articleTo Call A Journalist Tribalist Is The Least We Expect From An Elderly Statesman Who Is A Symbol Of Our Country’s Struggle,” Star Media Group
Next article“Over Thirteen Thousand People Displaced By Senegal-MFDC Conflict” – NDMA Director