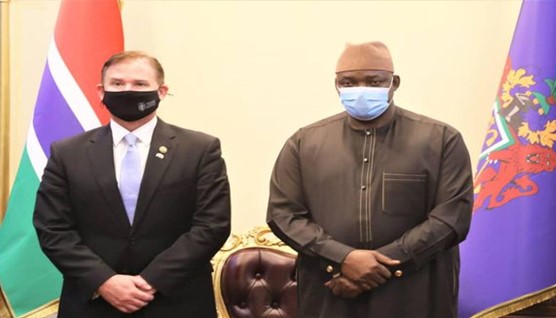 Outgoing United States Ambassador to The Gambia Richard Carl Paschall has said Gambia is a country filled with welcoming and hospitable people.

He was bidding farewell to President Adama Barrow on Tuesday 8th February 2022, as he raps three years in the country as US Ambassador to the small West African nation.

“My wife and I love The Gambia. This is probably the most welcoming and hospitable country I have ever been to. The people of this country are wonderful, warm and hospitable. We really respect and honour the aspiration of the Gambian people for democratic reforms, and I am gratified by the commitment the President has made since his election victory in December”

The existing Chief US diplomat in the Gambia, who has been in the foreign service since 1991, came to the Gambia in 2019, succeeding former US Ambassador to The Gambia, Patricia Alsup. He said it has been worthy moments discussing with Gambia’s leader on the bilateral relationship of both countries.

“This is the fifth time I am meeting with His Excellency the President. I always find these meetings to be worthy because of the issues we discuss together. The US and The Gambia are friends and allies, as a result, we can honestly and candidly speak with each other on the challenges of both nations and conform them with solutions.”

He expressed optimism that the two nations will continue to strengthen bilateral relationship to enhance mutual interest, particularly in promoting democracy and good governance.

“I am fortunate to have a competent and committed team of Gambians and United States citizens at the Embassy seeking to advance mutual benefit for the Gambian-American people. We share that vision and will continue to work together to that end”

As he ends his diplomatic assignment in The Gambia, Ambassador Paschall reveled that his successor will be arriving shortly into the country to take from where he left off.