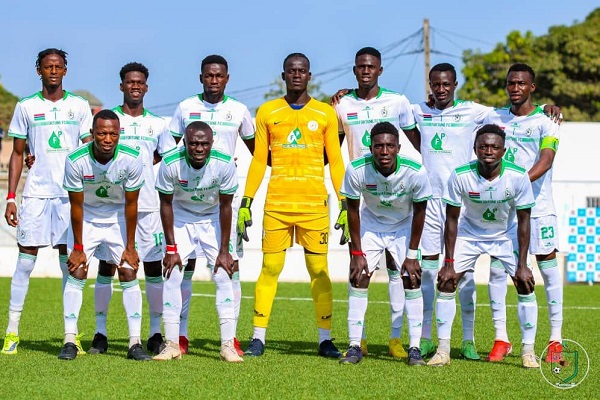 Fortune Football Club have prolonged their invincible and impenetrable run in the top division of Gambian football to four games with a hundred per cent winning streak without conceding a goal in three hundred and sixty (360) minutes following their 2-0 triumph over PSV Wellingara at the Brikama mini stadium today, January 25.

Lefoe, as fondly named, first assisted Yusupha Darboe when he crafted a diagonal pass in the PSV Wellingara box for Yusupha Darboe to jump high and executed a powerful header at the back of the net in the 63 minutes of the game after several unsuccessful attempts by the Fortune players to break the deadlock.

At the tail end of the game, when spectators and fans were settling for a one-nil win, Lamin Saidykan formulated a glorious corner kick for substitute and debutant Alhagie Ceesay to smash the ball in at the back of the net to solidify the petroleum boy’s dominance and a hundred per cent start to the 2023 Gambia Football Federation Division One League game.

Coached by one of the most experienced technicians in the league, Jane Joof and his array of stars are rolling towards reclaiming the league title they won in style in the 2021 league season.

With four wins out of four games and four clean sheets, Fortune FC are on the path to reclaiming the league trophy.

“It is too early to talk about winning the league, but we are happy that we have recorded another win with a clean sheet. We will continue to play our games and win as much as we can. As a team, we have a target, and we are working towards that target in the first round,” head coach Jane Joof told the media after his side’s victory.

For Yusupha Darboe, scoring a goal in his first start for his new team means a lot.

“I am glad that I scored but happier for recording another clean sheet because as a defender, that is my responsibility. Scoring this goal means a lot to me, and I will continue to help my team in any way I can in every game.”

Fortune FC kicked start the league with a one-nil win over Banjul United in the first game before travelling to Banjul to inflict defeat on champions Hawks FC in the second game. In the third game, the petroleum boys conquered Team Rhino by a goal to nil before extending their unbeaten run and clean sheets to four games in a row against PSV Wellingara. They are currently on top of the league, followed by serial champions, Real De Banjul Football Club.