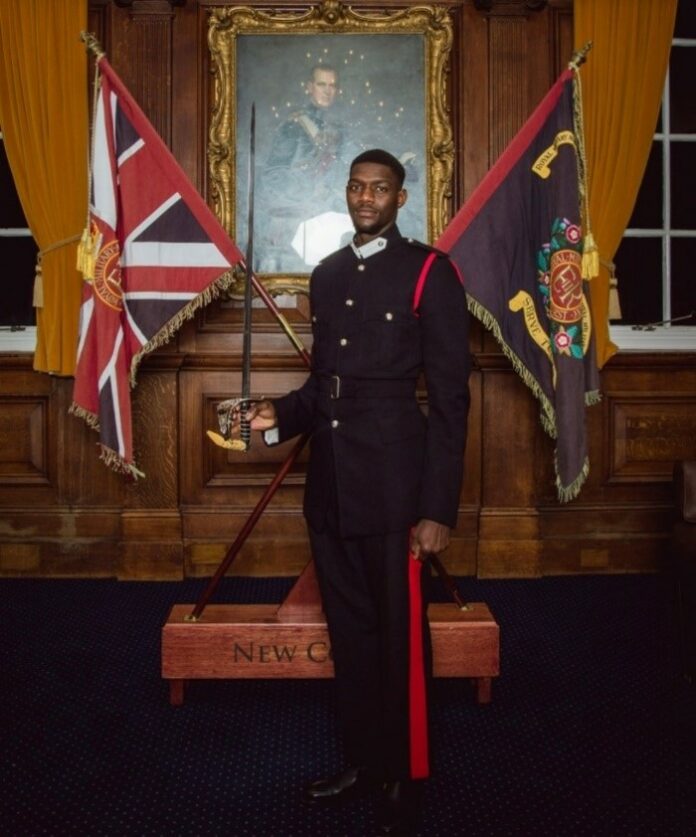 The British Army Officer Regular Commissioning Course 221 (9 Jan 22 – 16 Dec 22) commissioned on Friday 16 December 2022 at the Royal Military Academy, Sandhurst (RMAS). This was the 198th Sovereign’s Parade. I was privileged to be invited as a guest to witness a Gambian make history.

2Lt Ebrima Gaye of the Gambian Armed Forces (GAF) finished his 44 weeks arduous studies at RMAS and out of all the international Officer Cadets, he was bestowed upon 2 awards, namely:

His citation highlights quite a succinct narrative befitting of a man whose personality echoed around the parade square in front of New College. 2Lt Ebrima Gaye threw himself headlong into the Regular Commissioning Course since his arrival, performing well above the standard expected. Volunteering himself for the course was the first step towards his continuous self-improvement.

Incredibly well suited to military life, 2Lt Ebrima Gaye built upon his basic military training in the Gambian Army and made vast improvements throughout the course. His basic military skills, such as navigation and fieldcraft, are of a high standard, competing strongly against the top UK cadets. He showed a natural flair for leadership, this was particularly evident during a Company Second in Command appointment during the final attack of Exercise DYNAMIC VICTORY where he delivered clear orders and an extremely effective Rehearsal of Concept (ROC) drill. During the action, he maintained strong command and control and good situational awareness of the ongoing battle. He also successfully completed numerous Platoon level appointments with ease throughout the year. He performed to a very high physical standard, achieving top scores in the intake for the Soldiers Conditioning Review (SCR) and easily maintaining his outputs during team events.

Intellectually astute, his grasp of the combat estimate and orders process is sound, scoring in the top third of the entire intake. 2Lt Ebrima Gaye showed himself to understand and analyse theoretical concepts throughout the course. He is inherently engaging, articulate and well-versed in the depth and breadth of the subject. Of particular note was his summative War Studies assessment, where he got the second-highest score of the entire course of 213 British Army Cadets and 44 International Cadets.

A consummate professional, 2Lt Ebrima Gaye has held himself to an impeccably high standard throughout. He displayed trustworthiness, a highly professional attitude and total enthusiasm daily, and for these reasons, he deserved to be formally recognised.

2Lt Ebrima Gaye not only surpassed expectations but he was a shining example of a Young Officer. According to the Officer Commanding Major Alex Burgess, he easily surpassed many of the UK Officer Cadets and against a backdrop of tough competition from the international cohort in the Company. Utterly humble, and totally grateful for everything that he has received. Fit and strong, he exhibits vast reserves of resilience and has devoured all manner of tests during his time at Sandhurst. Bright, motivated and brimming with potential, he will become a fine Instructor and Officer within the Gambian Armed Forces. Recommended to return to RMAS as an Instructor in the future.

In conclusion, a huge congratulations again to a valiant young man. As you begin your life as an officer, continue to uphold the values and standards you’ve learnt in the last 44 weeks and apply them. Remember the RMAS motto, “Serve to Lead”. Always put your subordinates at the heart of all your decision-making. Treat them with respect, humility and loyalty and if these fundamentals are done right, they will be repaid back to you in spades. The journey now begins and shouldn’t be a feat to be undertaken alone. The whole nation, colleagues and the GAF leadership should help mould this young man to reach his potential. He went to faraway lands and made us all proud. Well done and good luck with your career.

This Article has 4 photos, the captions are below: 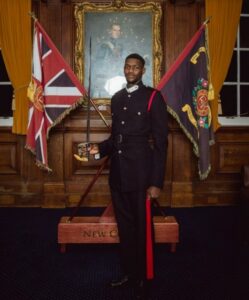 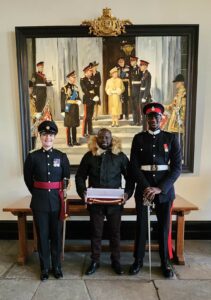