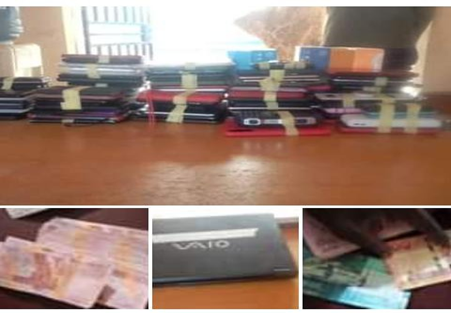 23 young men were recently slammed with criminal charges after a raid by the Police Anti Crime Unit (ACU) at the Serekunda “Black Market and different other locations within the greater Banjul area. This development came, after series of complains of crime and criminality in these places.

However, Operatives of the ACU of the Gambia Police Force (GPF) conducted the two patrol and raids in which 108 were arrested, after a thorough screening, 85 were released for not being found wanting whilst 23 were found with suspected stolen properties which include 207 mobile phones and some huge amount of cash in Gambian dalasi, suspected to be money used for buying stolen mobile phones, other electronic devices and jewelleries.

All the 23 were cautioned and charged for being in possession of suspected stolen property contrary to section 298 (A) of the Criminal Code, Cap 10 Vol 3 Laws of The Gambia. During the raid and patrol 8 boys were arrested in Manjai Kunda around the bridge, six of them were found with knives in their possessions, they’ve been charged as well.

In Bakoteh old tipper garage, another suspect was nabbed, with a pair of scissors and 38 wraps of suspected cannabis was found in his possession, he’s also charged criminally whilst the drug related offence will be handled by the NDLEA.

At Tabokoto, two motocycles were brought to the ACU, one of the motocycles was found abandoned on the road, bearing a Senegalese registration number and the other was abandoned by its rider who escaped after a long chase by officers on patrol.

In a separate development, Police operatives acted on a tip off, which saw the arrest of 3 adults of Gambian, Senegalese and Guinean nationals for being in possession of counterfeit/fake currency.

The suspects, Amadu Jah 34, Omar Jallow and Sulayman Barry are currently in custody helping investigators unravel the whole truth behind their nefarious and unlawful operations. When their residence in Jambur was searched, stash of fake CFA in 1000 denomination and Gambian dalasi of the 200 denomination was found, which are all counterfeits.

Further search revealed bunches of black papers cut into the size of currencies which investigators believed was going to be used to print more counterfeits. Suspects will be charged and paraded in court as soon as investigation into the matter is complete.